“The holy sites here are this country’s identity but they are also its curse,” says playwright Yehoshua Sobol, “Religion does not adapt easily to the phenomenon of love… so it tries to get rid of it.” Sobol’s words here capture the essence of this documentary, directed by Michel Khleifi, which sheds light on couples who have gone against the wishes of their families and societies, and the laws of their religions and states, to be together. But, in fact, this documentary goes beyond simple binaries of Palestinian and Israeli and of Muslim and Jew to the multiplicity of prejudices that proliferate in both Israel and Palestine. Khleifi interviews eight couples who have married between Islam, Christianity and Judaism, across nationalities, and across races, often with similar stories of ostracisation.

Each couple have experienced intolerance in various ways – some have lost jobs, others have lost family and friends, some have given up their religion – but each has found a different way of dealing with their complicated situation. This is somewhat reflective of societies in Israel and Palestine who have spent generations building coping mechanisms against the harsh realities of occupation and militarisation. For some, the way to cope is to embrace their new homes and beliefs, to create their own families, or to disown it all completely – as one woman explains, “I see all this as if it were a scene in a film: upsetting, irritating, funny […] not as the reality in which we live”.

A Palestinian Muslim woman who married a Jewish Israeli man describes how her family reacted to her choice of spouse: “The way they see it, I’ve gone against every possible rule: tradition, morality, religion […] against all social, political and religious norms. For them, it is a crime for which I must be punished”. Another couple were both born in Palestine but the woman’s father was from Chad. The man explains that both his parents and his left-wing friends were completely against the idea of him marrying a black woman.

But the one thread that seemed to run throughout these experiences was an overwhelming concern for the generation to come – the children from these inter-faith, inter-racial unions struggled even further with a sense of identity and belonging in a place where such a notion is crucially important. The parents describe bullying at school and endless existential questions from their young children who are often bilingual, in some cases without a particular religion, and who often feel they are missing members of their immediate family.

The documentary is interspersed with scenes from a rendition of the incredibly apt play Romeo and Juliet, highlighting the timelessness of love’s plight against intolerance of all kinds. However, this documentary does not end in a dramatic spilling of blood and revenge. As much as this film shows the sad reality of prejudice in a place that is torn apart by hatred and intolerance on a daily basis, it is equally a testament to love and resilience and the hope of finding light in amongst the darkness. 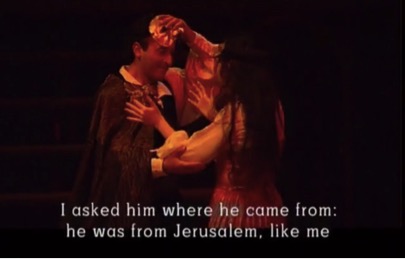 See Forbidden Marriages in the Holy Land at the Mosaic Rooms on Tuesday 21 July 2015 at 6pm.

This film is part of a series, ‘A Homage to Michel Khleifi’, for which Shubbak Festival has invited the Palestinian director to mark the occasion of his 65th birthday by curating the festival’s main film programme: a themed, personal selection from his own films in dialogue with works of Arab and European cinema.